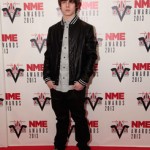 As previously reported hereJake Bugg used the NME awards as a platform to take a swipe at One Direction. See a video of the interview below: Source: The Press Association

Jake Bugg’s continued attacking One Direction last night by suggesting they aren’t really a “band”. A spat began last week when Jake expressed his disgust at people referring to the quintet – who won the Global Success award at the Brits – as “the new Beatles” in a magazine interview. But it raged on further […]