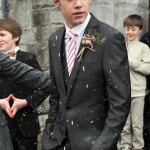 He’s one fifth of the world’s biggest boyband and has had to stand up in front of crowds that total in the thousands. On Wednesday, One Direction’s Niall Horan took on his biggest gig as he stood watch at the altar as his older brother Greg got married. Taking on the role of the best […]