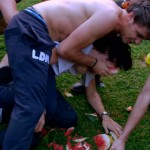 LIAM Payne goes topless as he wrestles Harry Styles and squashes watermelon in his face in the trailer for the new One Direction movie. Liam Payne and Niall Horan have been spotted topless in the new 1d 3D Movie out in the summer. Liam is wrestling with Harry Styles as he squashes a watermelon in […]

For our non-UK readers who probably didn’t get to see the one direction interview which contained a world exclusive on the release of the 1D 3D Movie – you can catch up and see the interview that aired this morning in the UK on ITV’s Daybreak below: What did you guys think of the interview […]

UK Viewers will be able to get a sneak peak of One Directions new 3D Movie/Video on today’s edition of DayBreak on ITV. The movie is not due to be released until August 2013 – however ITV’s Daybreak have managed to get a supposed world exclusive to show a brief clip from the movie. A […]