Welsh Teacher camps out overnight to get pupils One Direction tickets 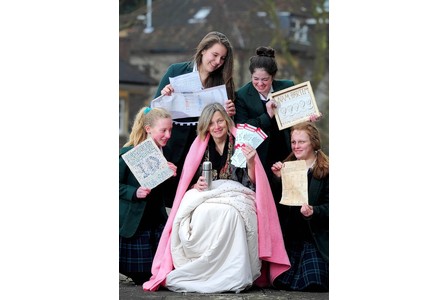 Some teachers will do their upmost to ensure their pupils get what they need in life and that’s exactly what Sally Knights did to inspire her class at Redland High School for Girls.

The 59-year-old pitched up a tent outside the Motorpoint Arena in Cardiff to secure four tickets to see chart-topping boy band One Direction. She offered the much sought-after tickets as a prize for students producing the best work in a homework assignment.

The four winning students, Rosie Hunter, Maya Coleburn, Daisy Crane and Daisy Ward, were given their tickets yesterday and will travel to the Welsh capital to see the former X Factor contestants on stage on Friday.

Ms Knights queued alone for 16 hours to land the tickets in February last year, reading books, drinking hot chocolate and wrapping up in blankets to get through the night.

She said: “Because I work in a school with girls, I know what interests them. Initially I thought it would be a bit dangerous to camp out but there were about 100 yards of 13 and 14 year olds in tents in the queue ahead of me when I arrived.

“There wasn’t any danger – it was just squealing girls. I was definitely one of the older ones there. I pitched my tent and had a chair – I hardly got any sleep and just read through the night. It was February so it was a similar temperature to what it is now – it wasn’t freezing but it was certainly cold. The queue started moving at 9.30am the next day and it was about 10.30am when I got my tickets. By the morning the queue was going around the block. The tickets for the concert sold out within a couple of minutes online but some were made available at the venue. Their was great excitement from the winning students – they were saying things like ‘I must phone my mum straight away’.”

Ms Knights, whose 16-year-old daughter Camilla is also going to watch One Direction in Cardiff, tasked her Year 9 students with either designing a poster for a One Direction tour of ‘Ancient Greece or Rome’ or writing a band tour review to win the tickets.

The teacher said the entries were imaginative and ranged from posters to sculptures and mosaics.

She said: “The artwork they produced was tremendous. It has helped the students understand that with the concert, the same things were happening with Roman gladiators – they were the superstars of their day and people would crowd to see them.

“Some of the girls translated some of the titles of One Direction songs into Latin. The concert is an interesting way to get the students to use Latin more and to see things in a bigger perspective.

“It’s not just a modern thing to queue up for an arena to get tickets – the Romans did the same thing.”

It’s not the first time Ms Knights has gone the extra mile to inspire her students – she has invited them into school at 4am to read the Odyssey, organised a sleep over in the school’s attic and taken them on a trip to the haunted castle at St Briavels in the Forest of Dean.

Caroline Bateson, the school’s headmistress, said: “Ms Knights showed great fortitude and commitment getting the tickets and her efforts were much appreciated by her classics students.”