One directions new song for UK based charity – Comic Relief – aka Red Nose Day has been leaked out on the internet – 1 WEEK before release.

According to the UK Tabloid ‘The Mirror’ – an investigation is underway by one direction’s management company – SyCo (Simon Cowell’s company) to figure out how this may have happened. The leak is potentially going result in Thousands of pounds of lost revenue – all for comic relief.

One Direction band member – Louis Tomlinson, 21 – has already spoken about his frustration around the incident and is urging fans to buy the single online via iTunes on a pre-order basis.

The song ‘One Way or Another’ is a cover of a blondie track and can be downloaded / pre-ordered thru iTunes . 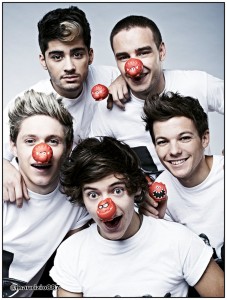 ← The Haylor Song, a Parody song of Taylor Swift and Harry Styles dating future
Zayn Malik to quit One Direction →