Niall Horan has revealed in a recent interview with ‘We Love Pop’ magazine that the One Direction lads got a ‘serious dressing down’ from their management over their 18th Birthday Celebrations.

Niall admitted that when he and his fellow band-mates turned 18 – they decided to visit the casino. All harmless given they legally entitled to go to a casino – however, the band got a serious telling off once their management found out they had been spending/gambling significant amounts of money… oh dear!

Niall is quoted to have told We Love Pop – ‘Like most of the stupid things we do, it seemed like it was a good idea at the time. We just thought, “We’re 18, this is the first time we’ve been able to spend a bit of money in weeks because we’ve been on the road.”

‘I won £100, which seemed reasonable, then I stopped. But I’ll have to say, ‘No comment’ about the others.

‘Let’s just say it got a bit ugly and a lot of money was lost. A lot. When our management found out, we got a serious dressing-down about it.’

But at least Niall knows that he and his bandmates, Harry Styles, Louis Tomlinson, Liam Payne and Zayn Malik, can keep each other in check

Louis said: ‘I think that’s the beauty of being in a band. Often people who have had fame from such a young age as solo artists find it harder to stay grounded, because it’s just them.

‘But with us, we’ve got each other. The minute one of us falls out of line, another one of us will set them straight!’

Do you think the boys were irresponsible – leave us a comment below! The full interview can be read at We Love Pop Magazine. 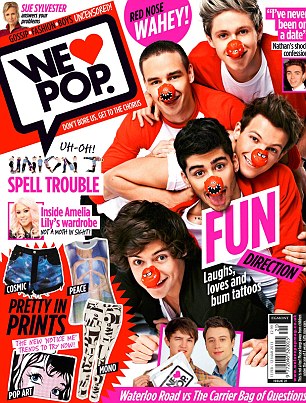 One Direction on the cover of We Love Pop Magazine which has a full interview with the boys.

← One Direction Dolls to be released by Hasbro!
One Direction, Taylor Swift Face Off At Kids’ Choice Awards →