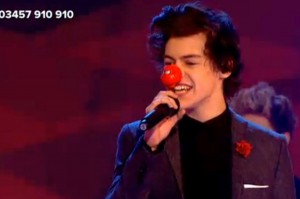 One Direction turned up and performed in front of a live audience at the BBC’s studio’s yesterday (15 March 2013).

The boys got into the spirit of red nose day – Harry Style pictured above wore his red nose whilst performing and the rest of the band tried to wear items of red clothing. 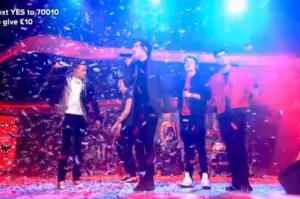 Watch a video of their performance uploaded on YouTube by a fellow-one direction fan below:

Zayn Malik was unable hide his excitement about performing on the show by tweeting the following:

Equally the rest of the band got in the spirit of things with tweets throughout the day around red nose day with Harry Styles shouting out a person eating a kebab in the audience during the band’s performance:

Do something funny for money.. We shaved half of benwinston ‘s beard!! Happy Red Nose Day .xx instagr.am/p/W4PaHdjCaH/

Thank you so much Manchester.. Amazing crowd tonight. And to the person eating a kebab during the show. You’re my hero.

change the motha fucking world That’s the power Of 1D fans and you know it comicrelief.com/donate go there now or your nose will fall off

Happy @rednoseday ! Lookin forward to today! Hopefully Everyone gets behind a great cause

BBC, Blondie - One Way or Another, Comic Relief, One Direction, Red Nose Day 2013

← Louis Tomlinson apologises to fans for not being able to jump around on stage after injuring knee – see video and tweet here!!
One Direction Fans Delighted as Harry Styles and Niall Horan Strip !! →