Niall Horan has been flirting with actress Rachel Shenton on Twitter.

The One Direction heartthrob was smitten with the Hollyoaks (popular UK TV Soap) star after he spotted her on TV show ‘This Morning’ (UK Daytime TV show) and took to his Twitter account to praise her beauty.

Niall wrote: “That girl on @itvthismorning is beautiful!”

In reply, Rachel and TV presenter sent him a picture on Twitter with the actress holding up a sign saying “Hello Niall xxxx” while Niall immediately sent back his own picture message saying “Hello Rachel !! xx.”

Rachel played down the chance of romance…She told heat magazine: “He’s a bit young for me! What is he? Like 12?”

Niall – who has been linked to US ‘X Factor’ judge Demi Lovato in the past – recently insisted he is looking for love.

He said: “I’m definitely single. I’d like a girlfriend. All these things in the papers about me saying I’d rather sleep than find a girl is ridiculous. I was just explaining that on my time off I like to chill.

“I’m not actually looking but if the right person came along, definitely” 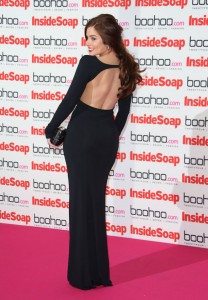 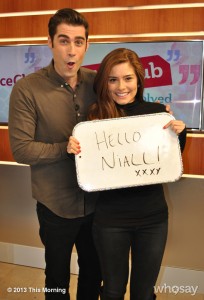 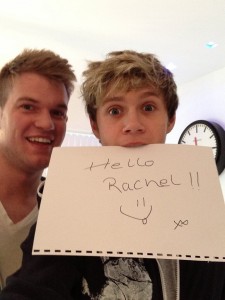 ← Watch full One Direction Exclusive Interview with ITV Daybreak – Feb 2013
Harry Styles hints that he’s not staying single for too much longer. →