Harry Styles and Taylor Swift holding hands, Its getting serious! 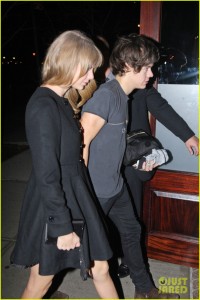 Harry Styles and mega-country super star Taylor Swift were photographed holding hands as they headed back to their hotel room at 4 a.m. the other night.  Taylor and Styles attended an after party for One Direction’s concert in New York City.

It was reported the two went on a romantic date at the Central Park Zoo this past weekend.  Harry has really upgraded over his previous love interest as he went straight to the top of the food chain.  Taylor Swift is one of the hottest singers in the World.  At 22-years-old Swift has four years on Harry as he is only 18-years-old.

For more photos head on over to JustJared.com

← Video: Groom Surprises Bride with One Direction’s ‘What Makes You Beautiful’ Dance
The Haylor Song, a Parody song of Taylor Swift and Harry Styles dating future →